Knowledge about the causes and development of interstitial lung diseases (ILD) has not yet been fully clarified. They are regarded as extremely heterogeneous clinical pictures with only one thing in common: There is an increased production of connective tissue – the lung scaffold is scarred, the lung function of the patients deteriorates and some forms of ILD are currently incurable and often fatal. The triggers for some ILD diseases are known: drugs, rheumatic processes or asbestos. In other ILDs, the cause cannot be determined and they are therefore called "idiopathic pulmonary fibrosis". It has long been ruled out that autoimmune processes play a role in them. However, recent findings suggest that autoimmune components, such as antibody-mediated autoimmunity, might also cause or at least favor some of the cases of idiopathic pulmonary fibrosis.

Identifying antibodies and "repairing" them with specific therapies

This is the starting point of the group led by Dr. Herbert Schiller and Dr. Gabriela Leuschner. The team has studied and discovered tissue samples from patients with advanced ILD and idiopathic pulmonary fibrosis, where they have an above-average number of antibody-producing immune cells, called plasma cells, compared to healthy individuals. This increased incidence of plasma cells was significantly associated with poorer lung function – both in lung disease patients with known cause of disease as well as in patients with idiopathic pulmonary fibrosis.

The hypothesis of the team is therefore:

A)    In idiopathic pulmonary fibrosis there is also an overreaction of the immune system, which now attacks the body and thus promotes chronic inflammatory reaction. The increased production of lung-specific autoantibodies could thus be involved in the worsening of fibrotic lung diseases.

B)    One could identify autoantibodies that are causative for an ILD or strongly promote it. In the future, it might then be possible to use a specific therapy (chimeric antigen receptors T-cell therapy, CAR-T) to program T cells in such a way that they stop the misdirected plasma cells. The success of such a therapy has already been shown in the mouse model for the autoimmune disease pemphigus (skin disease). However, this requires the exact identification of disease-specific autoantibodies and their subclasses.

The team is developing different new approaches in order to detect lung-specific autoantibodies and define the extent to which they accelerate the disease:

The analysis of the proteome (totality of all proteins) of autoantigens and autoantibodies in plasma and the genetic classification of plasma cells in the lung – with the following steps:

The scientists want to investigate which antibodies occur more frequently in patients with ILD in comparison to healthy controls – and to what extent the detection of such antibodies is associated with poorer lung function or survival.  Such experiments are a relatively new field in research on idiopathic pulmonary fibrosis. The scientists hope to find new therapeutic and diagnostic possibilities for this deadly disease. This is because the team has already successfully applied the method in patients suffering from the autoimmune diseases systemic sclerosis and ILD in which the presence of autoantibodies is known.

The aim: The analysis of autoantibodies/antigens shall be combined with patient data and information about the course of the disease. In addition, the team wants to answer the question: Can the profiles of the analyzed antibodies show how the disease develops in the specific patients? Can this be used to define a patient's personal risk and thus treat him/her more specifically and individually in the future? This could be a powerful impetus for future potential immunotherapies and personalized diagnostics. 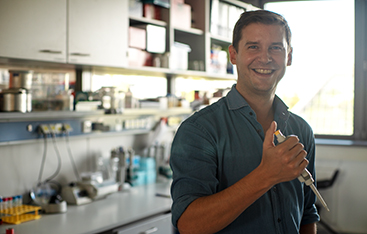 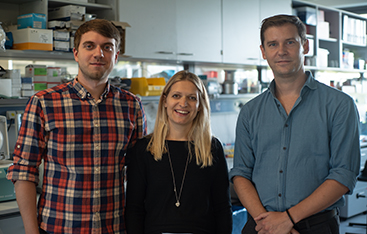 (from right to left)