What is pulmonary fibrosis??

Idiopathic pulmonary fibrosis  (IPF) is a subtype of interstitial lung disease, also known as scar lung, which is currently incurable. It is called idiopathic because it develops without clearly identifiable causes. However, it is known that air pollutants such as cigarette smoke and certain genetic factors increase the risk of IPF. The aging process also plays a role. As the most aggressive form of interstitial lung disease, IPF leads to death on average in two to three years after diagnosis.

What happens with idiopathic pulmonary fibrosis?

The severe course of the disease is mainly caused by scarring and fibrosis of the alveoli. This is where the gas exchange between breathing air and blood takes place. In fibrosis, there is a feedback mechanism that causes increased production of collagen, which in turn accelerates the scarring process. This is why it is believed that the disease is so fast and progressive. But which factors promote this feedback? And how can it be stopped?
This is what we want to find out.

Together with researchers at Yale University in the U.S., we evaluated data from German and American patients and found that in the lungs of IPF sufferers, there are increased amounts of the protein FKBP10. Normally, this protein provides the strength of bone and cartilage by contributing to the formation of collagen. In the lungs, it is produced in relatively little amounts. In the case of illness, on the other hand, the lung increasingly produces this protein, in parallel with the overproduction of collagens – the lungs become scarred. So if one could inhibit the collagen production or the activity of this protein, the scarring process could be stopped or slowed down. This could lead to a new therapeutic approach for fibrotic lung diseases.

How can we inhibit collagen formation in the cells?

With which inhibitor can we slow down collagen formation by FKBP10? We are investigating this by analyzing the protein biochemically. The aim is to find a molecule that could serve as a starting point for the development of a drug. Actually,  there are two drugs that are effective in idiopathic pulmonary fibrosis that slow the progression of the disease. We also studied and observed these medications: one reduces the formation of FKBP10, the other does not. Our goal, however, is to find a more effective way to stop fibrosis in the epithelial cells of the lung – by inhibiting the protein FKBP10 as a key player in collagen formation. Our long-term goal: In 2020, we would like to test the described therapeutic agent in clinical trials. 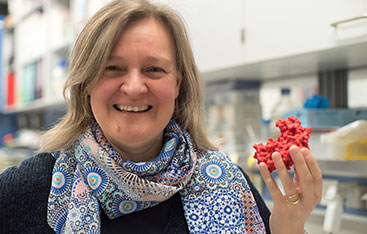 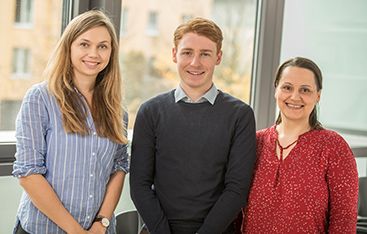 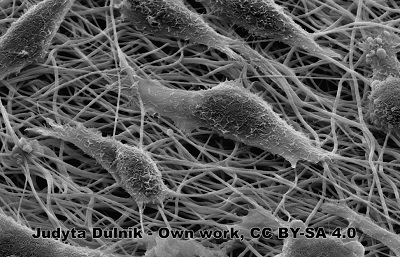 FROM PUZZLES WITH PROTEINS TO THE MIGRATION OF FIBROBLASTS

Experience in ”Lung Research 360°“ how the team in the laboratory observes the fibroblasts during migration. Look over the researchers' shoulder and accompany them on their search for therapies against scarring of the lungs...