New findings on the process of wound healing

How do scars form? Group of CPC-M scientists finds fascia function as a repository of scar tissue

When it comes to fibrotic diseases, e.g. lung fibrosis, abnormal scarring plays an important role: the abnormal proliferation of connective tissue is responsible for the massively poor course of the incurable lung disease. Until now, however, scientists have puzzled over where and how exactly these scars form.

The team around Dr. Yuval Rinkevich, DZL group leader at the DZL Munich site (CPC-M) has now discovered: It is the fibroblasts originating from the underlying fascia that are responsible for wound healing - and thus for scar formation. Until now, it was assumed that the wound-healing fibroblasts originated from the surrounding dermis.

Where do the fibroblasts come from - a search for traces

Scars occur when fibroblasts, cells of the connective tissue, migrate to the injured area of the skin and close the wound there. But from which part of the tissue do the fibroblasts come, where do they originate? This question has remained unanswered until today. The team wanted to find out the cellular and anatomical origin of scars. They pursued the hypothesis that the fascia could be the origin of wound-healing fibroblasts.

No fibroblasts from the fascia - no complete wound healing

The team initially used a technique that led to apoptosis (cell death). This extinguished the fascia fibroblasts. It was discovered that no matrix was incorporated into the wounds and only abnormal and unhealthy scars with major disadvantages were formed.

Now the team wanted to know: What happens if the fibroblasts are not destroyed, but prevented from reaching the wound. The researchers placed a porous film under the skin, a kind of membrane, and thus blocked the movement of the cells. This, however, led to chronic open wounds. The team now concluded that a kind of specialiced kit containing all the cell types and matrix components needed to heal wounds is located - not in the dermis - but in the fascia. The results also suggest that the movement of the fascia can be manipulated. It is therefore possible that disadvantageous features of scars, such as bulges, could be prevented by targeted intervention.

These findings contradict current paradigms of how wounds repair. The new knowledge could lead to new therapies, for example for the containment of fibrotic reactions such as in lung fibrosis. Or, in general, to enable better wound healing in a wide range of diseases. The researchers are convinced of this. Group leader Yuval Rinkevich:
"The results give new meaning to fascial tissue. The focus of attention in wound healing will now not only be on fibroblasts in the dermis, but also on the cells of origin of the fascia".

Donovan Correa-Gallegos, PhD student at CPC-M and first co-author of the study, adds: “Our new findings challenge and reconfigure the traditional view of the body’s matrix system of connective tissue. This is opening up a new biological concept that radiates to a variety of aspects of scar-related disease.” 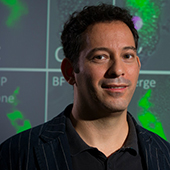 Koopmanns T., Rinkevich Y., Comun. Biol. 2018:
Mesothelial to mesenchyme transition as a major developmental and pathological player in trunk organs and their cavities

Tsai JM et al., Science Translational Medicine, 2018:
Surgical adhesions in mice are derived from mesothelial cells and can be targeted by antibodies against mesothelial markers.