What happens in lung cells involved in diseases like hypertension, edema or fibrosis?

The research groups at the Walther Straub Institute of Pharmacology and Toxicology at the Ludwig-Maximilians-Universität (LMU) Munich (Director Prof. Dr. med. Thomas Gudermann)  are investigating specific cell target structures in lung cells: the family of TRP cation channels. TRP proteins are ion channels that ensure the transmission of electrically charged particles (ions). Without these channels, positively charged potassium, sodium, magnesium or calcium ions are not able to cross the cell membrane. TRP channels also play an important role in the perception of taste, temperature or pain.

What happens if these ion channels are either blocked or activated? How does it affect the physiology of lungs?

The groups are initially investigating this topic in mouse models and also in patients in the future. The first results are summarized in this figure: 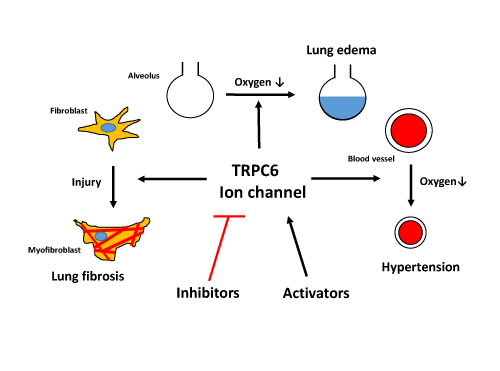 Blocking of TRPC6 could also have a positive effect on lung transplantation. During transport from the donor to the recipient the isolated lung is not supplied with blood and oxygen, which often induces fatal water retention (edema) after transplantation. In isolated mouse lungs TRPC6 blockers were able to prevent this damage. If they are injected into donor lungs during transport, the number of fatal transplants could be reduced in the future.

Moreover, after lung injury so-called myofibroblasts, which are formed from the body's own fibroblasts, migrate into the injured tissue during repair processes. Massive invasion of these cells (pulmonary fibrosis) irreversibly damages the lung tissue and prevents gas exchange. TRPC6 channels are expressed and promote this process during the transformation of fibroblasts into myofibroblasts. Therefore, mice without functional ion channel are partially protected from experimental pulmonary fibrosis.

The next step: Investigation of other subfamilies of TRP channels

While research groups have already been able to conduct first experiments with channel activators and inhibitors (blocking agents), many other TRP channels in the lung still lack agents that need to be characterized and tested. Many TRP channels such as TRPA1, TRPV4,  TRPM2, TRPM6 und TRPM7 are active in the lung epithelium. They could act as sensors for toxic substances in lungs and may serve as target structures for drugs that can prevent or reduce toxic lung damage in the future. 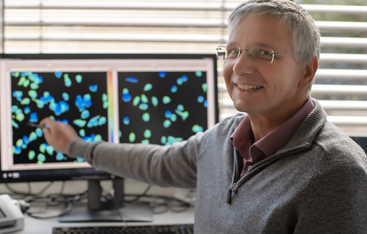 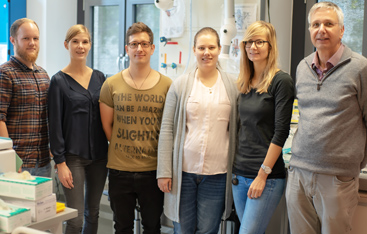 (from left to right):